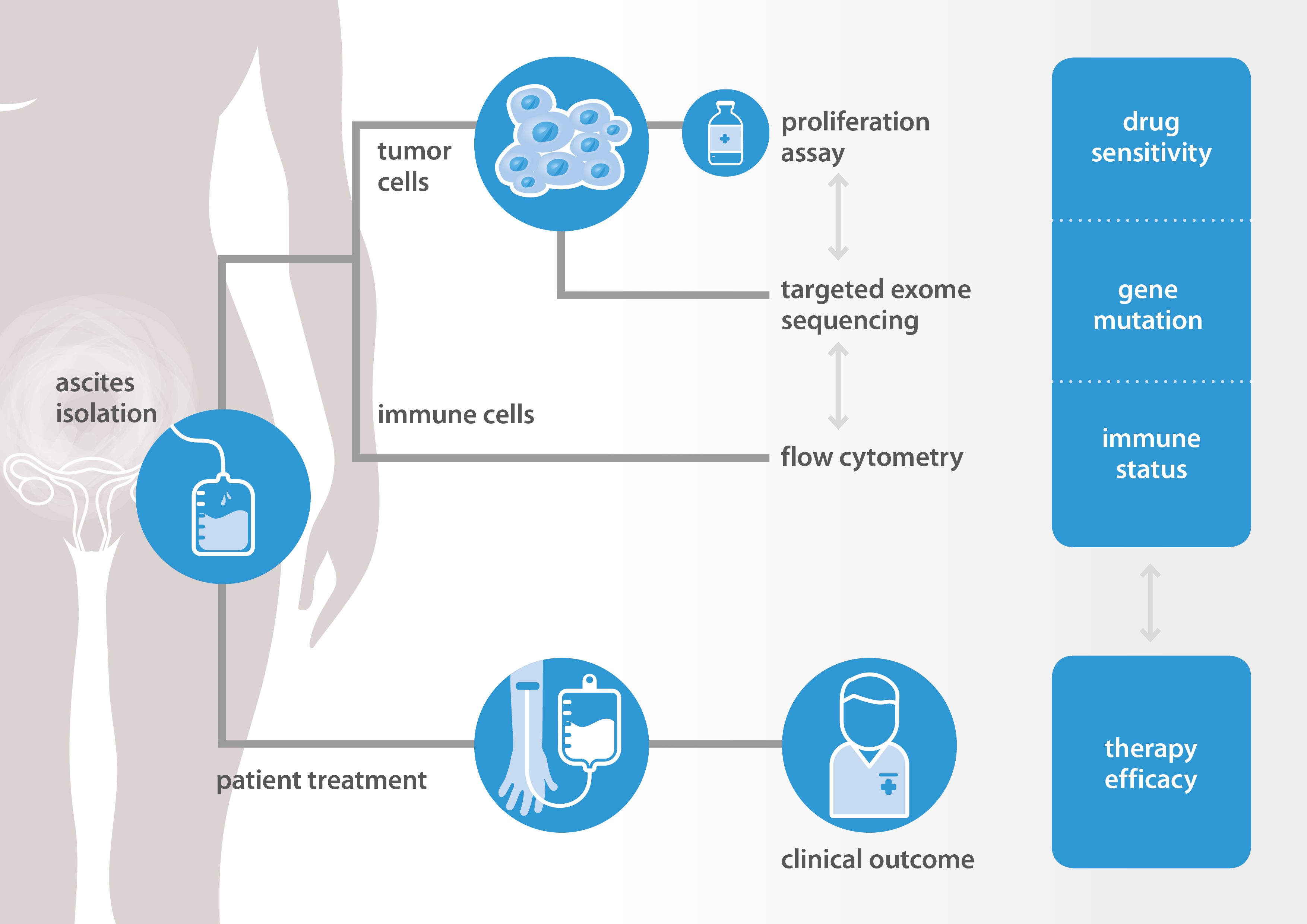 December 21: A new article on malignant ascites as a model for drug sensitivity testing is now online in Oncotarget (den Ouden et al, 2020).

Oss, December 21, – Epithelial ovarian cancer is the most lethal gynaecological cancer in women worldwide. In 15–20% of women the tumour does not respond to first-line treatment. In patients that undergo additional rounds of therapy, this number is even higher due to drug resistance. First-line treatment in high grade ovarian cancer usually consists of a combination of major surgery and chemotherapy with cytotoxic anticancer agents, i.e. paclitaxel and carboplatin. There is a need of assays to predict the clinical response of patients with ovarian cancer, to avoid suboptimal treatment and to prevent unnecessary side effects of inadequate chemotherapeutics. Researchers from Radboud University Medical Center (RUMC, Nijmegen) and NTRC are investigating the use of ascites obtained from ovarian cancer patients as a source of biomarkers to predict chemotherapy response (see schematic representation above). Ascites is the abnormal accumulation of fluid in the peritoneal cavity, causing abdominal swelling. Women with ovarian cancer often present with ascites at diagnosis, which is in many cases the initial reason why women consult their general practitioner. To relief complaints, ascites is drained by puncturing of the peritoneal cavity with a needle to sample the fluid. Samples are normally collected for diagnostic purposes, while the remaining fluid is disposed without further use. At NTRC tumor cells are isolated from the ascites and tested for response to chemotherapy in cell proliferation assays. Additionally, immune cells are isolated and characterized. The results from the in vitro laboratory tests at NTRC are compared to the clinical response of patients from whom the ascites had been collected. The final aim of the project is to develop an in vitro assay platform for personalized medicine in ovarian cancer using ascites. 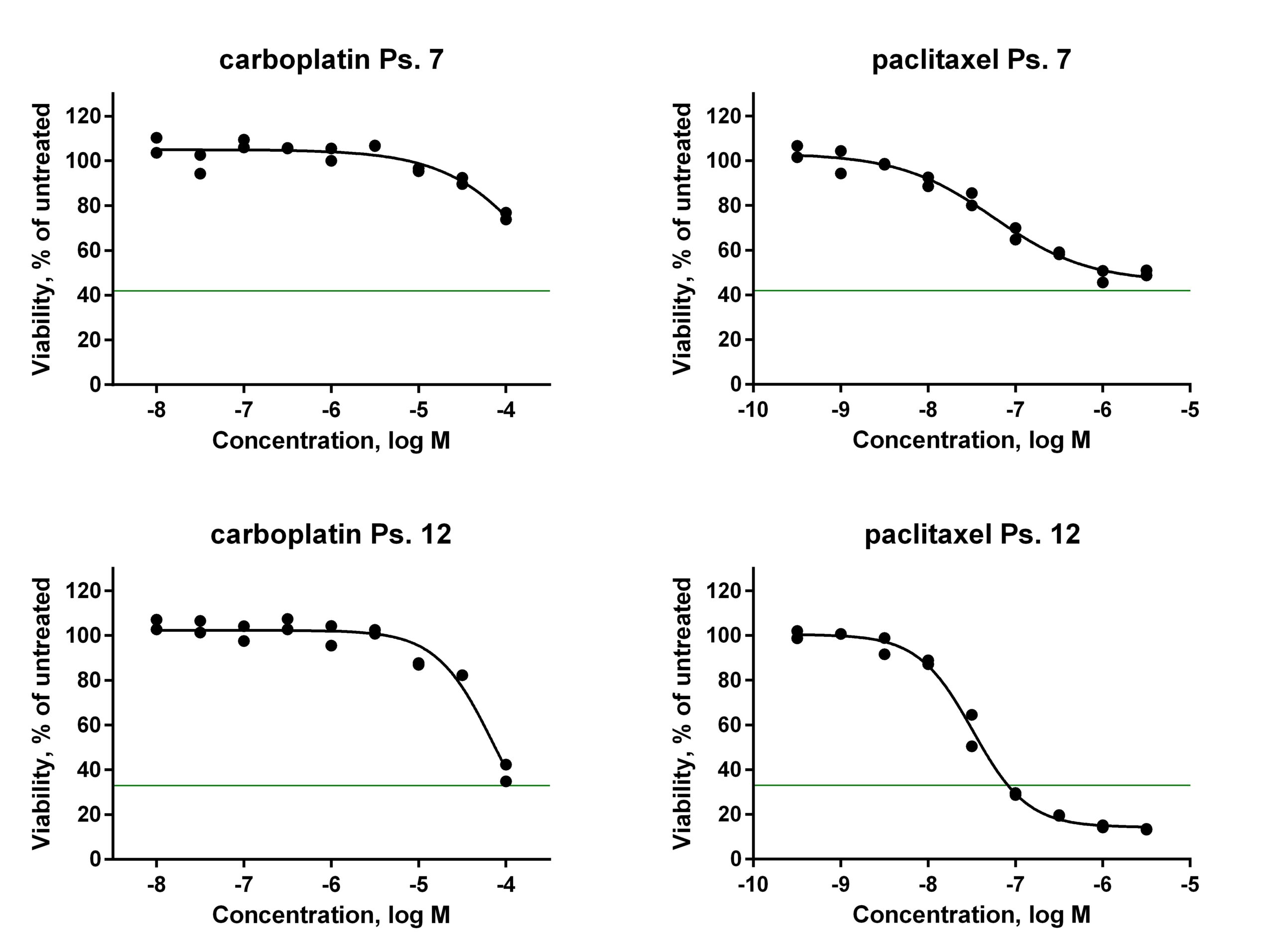 In a recent article in Oncotarget, the RUMC-NTRC team describes the use of tumour cells isolated from ascites of ovarian cancer patients in proliferation assays with classic cytotoxic agents (den Ouden et al., 2020). Results from the in vitro cell proliferation assays performed at NTRC were compared to the clinical response data of the patients from whom the ascites had been collected and that had been treated with the same anticancer agents. Patients were included from RUMC, Canisius Wilhelmina Hospital in Nijmegen and Catharina Hospital in Eindhoven. In total, cell samples of twenty patients were collected, of which three failed to proliferate and three were excluded because clinical outcome could not be determined. In twelve of the fourteen remaining cases (86%) in vitro drug sensitivity in proliferation assays and clinical outcome corresponded, demonstrating the feasibility of the approach. All samples were studied in more depth for the expression of ovarian cancer markers, to confirm that the cells indeed were tumour cells. In comparison to previously published approaches to predict clinical response in the lab, such as the organoid technology developed at the Hubrecht Laboratory (van de Wetering et al., 2015), the RUMC-NTRC approach is more robust, easier to perform and much faster, enabling drug sensitivity testing prior to the initiation of chemotherapy treatment.

In an ongoing expansion of the study published in Oncotarget, the number of patients will be increased to hundred and additional characterization of the ascites fluid and cells will be performed. While the collection of new ascites samples is temporarily on hold due to COVID-19, the studies at NTRC continue.

NTRC is a precision medicine company dedicated to discovering new anti cancer drug candidates. We help you to find a mechanistic hypothesis before entering the clinic. We can study a wide range of cancer cells, primary patient material and immune cells in vitro, in isolation and in coculture, after exposure to monotherapy and combination therapy. In addition, we perform in-depth mechanistic analyses in cells and by biophysical methods, such as Biacore and LC-MS/MS.  Keywords are: Quality. Flexibility. Short Turnaround Time.